Arundel Castle – One of The Longest Inhabited Castles in The UK 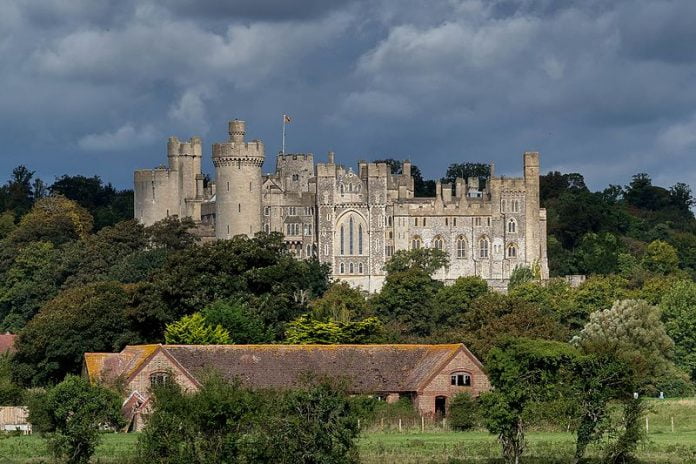 Arundel Castle holds the honor of being one of the longest inhabited castles in the UK–walking through its halls is like wading through a thousand years of history. Located in West Sussex, England, this monument to the past used to be a royal stronghold for the Earl of Montgomery and is best known for guarding the town against French invasion. At the time, the city was a busy port with ships sailing inland through the Arun River.

The historical significance of Arundel Castle can be seen through the fact that it has stood tall and proud through the Wars of Roses, the Tudor period, and the Civil War. It has been home to the Dukes of Norfolk since the 16th century. Let’s look at everything you need to know about it:

Where is Arundel Castle Located?

Arundel Castle is located in Arundel, West Sussex in England.

When Was Arundel Castle Built? Who Built It?

The castle was built on December 25, 1067 by Roger de Montgomery.

The best time to visit is during the spring season as the weather is pleasant enough to explore the castle grounds on your own.

Other iconic places nearby include Arundel Cathedral of Our Lady and Saint Philip Howard, Arundel Baptist Church, and Saint Mary’s Church.

There were two families involved in the history of Arundel Castle – the FitzAlans and the Howards.

It was initially built by Roger de Montgomery (circa 1067) as a defensive motte-and-bailey structure consisting of a Norman keep-style architecture. The keep stands proud in its original form to this day – as do the gatehouse and barbican. The grounds were gifted to Montgomery by his cousin, William the Conqueror, as a reward for conquering Normandy while he campaigned in England.

With the death of Roger Montgomery in 1094, the estate was transferred to his son Hugh and later passed on to his elder brother, Robert of Bellême. However, Robert was exiled and the estates were secured by Henry I.

The Fitzalan line ceased with the marriage of Mary Fitzalan to Thomas Howard, the 4th

The Fitzalan Line of Inheritors

Arundel Castle was passed down by Henry I to his second wife Adeliza of Louvain. Unfortunately, Henry I passed away and Adeliza remarried. It was 1138 when the property was taken over by her second husband, William d’Aubigny, First Earl of Arundel, who made significant upgrades to the castle. In fact, he was the one who initiated and completed the construction of the stone shell keep.

It was during this time that Arundel was the center of the Anarchy – a civil war movement between Stephen (Henry’s nephew) and Matilda (Henry’s daughter). Although William was on Stephen’s side, he opened his home at Arundel to Matilda as well.

Henry II took over the castle after William’s death in 1176. He spent a large amount on restructuring the castle. It was eventually offered back to the d’Aubigny family by King Richard I. The d’Aubigny’s last male line married into the FitzAlan family in 1243.

The Fitzalan line ceased with the marriage of Mary FitzAlan to Thomas Howard, the 4th Duke of Norfolk.

The Howards were another illustrious English family. They came into possession of Arundel Castle through marriage. The 4th Duke of Norfolk came from a well-respected family. His grandfather – the 3rd Duke – was the uncle of Catherine Howard and Anne Boleyn, both were wives of Henry VIII.

Thomas, the 4th Duke, died an ill-fated death. He was actually executed for his collusion in the Ridolfi plot (a plan to replace Elizebeth I with Mary, Queen of Scots).

During the Civil War (17th Century)

Arundel Castle played a key role in the 17th-century Civil War. The Howards supported the Royalists at the time and the castle became the garrison of around 800 men.

However, Arundel fell to the Parliamentary side in 1643 under the siege of William Waller–a commander who had garnered several victories before (most notably at Alton). The Royalists were ultimately defeated and parts of Arundel Castle were destroyed so that it could not be used for military defense again.

It wasn’t until the 18th century that the South Range was restored and the castle started being used as an occasional residence.

It was the 11th Duke of Norfolk, Charles Howard, who commenced with the actual restoration of Arundel Castle. He wanted to carry out the entire revamp in the Gothic style, but the intense disapproval from Queen Victoria halted his efforts in his track. Victoria called the initial gothic plans “bad architecture” so another round of restyling was carried out in the latter half of the 19th century.

This new venture took inspiration from the lighter, brighter Gothic Revival movement and Charles Buckler was hired by the next Duke of Norfolk. This is the Arundel that we see today.

The Best 24 Castles to Visit in Greece (Listed by Popularity)

At present, the castle is still owned by the Dukes of Norfolk, currently the 18th Duke and the Earl Marshal of England. Arundel is open to the public for viewing.

The quadrangle outside the castle greets visitors with turrets and chimney stacks. The Victorian-era interiors feature a collection of eclectic paintings like the Canaletto landscapes in the drawing-room.

Other than that, there are quite a few unique artifacts that can be appreciated at Arundel Castle as well. These include sumptuous furniture from years gone by as well as gorgeous tapestries. Visitors also love the armory displays that are installed with ceremonial weapons, and of course, history buffs love the galleries with family portraits that highlight 850 years worth of history. The chapel with stained glass and Purbeck marble columns is also an architectural highlight.

Arundel Castle stands proud in all its magnificent glory these days. It’s an important tourist destination – one that you should definitely put on your itinerary if you’re in the area. Here’s all you need to know about planning a visit:

How to get to Arundel Castle?

There are quite a few ways to get to Arundel Castle from London. The cheapest way is by driving your own car. The travel time for this option is almost one and a half hours and it’s going to cost you between £11-£17 ($13-$20 USD).

If you want to venture out on public transportation, then you can take the train from Victoria Station, London (which runs every 4 hours) and get off at Arundel. From there, it’s an 18-minute walk to the castle. The ride takes an hour and forty-five minutes and costs between £18-£49 ($21-$60 USD).

In order to take in the full expanse of the garden, castle, and interiors, plan to spend at least three (or more) hours at Arundel Castle.

For up to date ticket prices and visiting hours visit the official website: https://www.arundelcastle.org/opening-times/