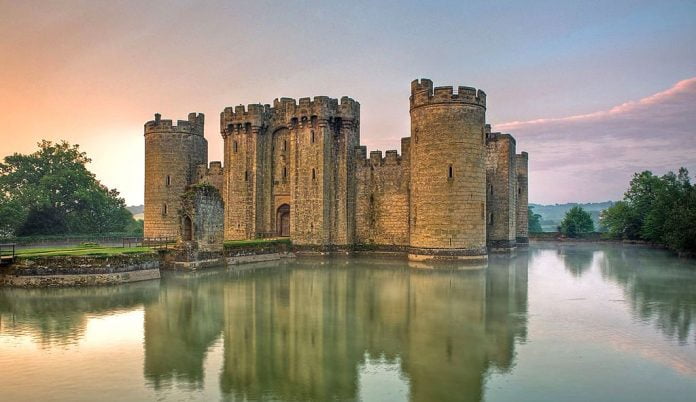 At a glance, Bodiam Castle is one of the most romantic places that you may ever see. Its verdant landscaped gardens, waterways, and fascinating ruins bring images of royalty and nobility to mind.

The castle was built in the 14th century to protect the area from invasion by the French. The archetypal castle features a portcullis, battlements, circular drum towers, and a protective moat – typical features of the medieval castle defense system. Its architecture is not only a remnant of a historically-rich past but also an attraction that fascinates a huge number of tourists every year.

The castle has seen several wars and sieges but the walls remain strong. Local and foreign visitors often bask in the castle’s majestic ruins as historians continue to tell many of the heroic tales that happened during the Hundred Years’ War. Let’s look at everything about it:

The interior of the castle still remains in ruins and there aren’t any notable records of how it was arranged in the first place. However, one can still see the outline of the domestic buildings against the ruins of the curtain wall.

Where is Bodiam Castle Located?

Bodiam Castle is located in Bodiam, East Sussex, England. If you plan to visit more fortresses on your way, make sure to have a look at this best castles in England list!

When was Bodiam Castle Built? Who Build It?

The castle was built in 1385 by Sir Edward Dalyngrigge. It was built to stop the French soldiers from invading the East Sussex territory.

Spring is the best time to visit the castle as it highlights the castle’s greenery. You can experience the lushness of the surroundings in full glory during this time.

You can visit the house of Rudyard Kipling, Bateman’s Jacobean House, Scotney Castle, the gardens of Sissinghurst Castle, and the Lamb House nearby.

Origins: From a Manor to a Castle (14th Century)

In the early 14th century, the beginnings of Bodiam Castle started as a manor home for Sir Edward Dalyngrigge (a knighted soldier who had made his fortune fighting France, which has beautiful castles too) and his wife Elizebeth. He designed it to be a place where his family could rest and enjoy a comfortable life. When he was given the license to crenelate by King Richard II, Sir Edward not only installed walls for battlements but decided to construct a fortified castle instead.

He did so as he and his wife lived through turbulent times. From the threat of the Black Death to the Hundred Years’ War, and the French invasion in-between, Sir Dalyngrigge saw it fit to make a family home that was well-protected on all fronts. Thus, he conceived and designed Bodiam Castle.

However, more than pure military defense, Sir Edward designed the castle to have a quadrangular shape. This shape allows the place to have spacious inner courts for people living and working inside the castle. He also added the moats not just for aesthetics or defense, but also as a sewage system.

Bodiam Castle was inherited through the Dalyngrigge line until the last of them died. After that, ownership was transferred by marriage, and the castle was then taken over by the Lewknor family.

They remained in possession of Bodiam until it was taken away from them during the War of Roses. Eventually, their possession was reinstated and the Lewknors remained in ownership until the 16th century.

Bodiam Castle was sold to the Parliament in order to pay the fines accumulated by Sir Thanet (a Lewknor descendent) during the English Civil War. The building underwent severe dismantlement so that it could not be used by the Royalist side again.

After being left in a state of decay, it was then bought by politician John ‘Mad Jack’ Fuller. He partially restored the castle and left it in his will to his family, who later sold it to Sir George Cubitt (the very first Lord of Ashcombe). After that, it came into the possession of Lord Curzon, Marquess of Kedleston. Both of these owners furthered the restoration works on Bodiam, trying to reinstate it to its full glory.

The building was finally handed over to the National Trust in 1925 by Lord Curzon on his deathbed. He wanted Bodiam to be open and accessible to the general public.

The Best 20 Castles to Visit in Bulgaria (Listed by Popularity)

Today, the National Trust still has full authority over the castle. They started restoring, conserving, and regenerating the important parts of the ruins. The Trust also aims to restore the artifacts, collections, and historical paintings that date back to the early 14th century.
Aside from the historical artifacts, the organization also aims to conserve the wildlife living around and within the castle walls. Several bat species like Daubenton’s bat and Natterer’s bat have found themselves a home in the castle.

The National Trust also allows wedding ceremonies and movie shootings inside the castle’s walls. If you happened to see the movie Monty Python and the Holy Grail, a lot of the scenes were actually shot inside this majestic fortress.

Restoration of the beautiful ruins of Bodiam Castle continues through donations and funds raised from the use of its facilities and visits to its attractions. Some of the attractions of the castle are archery lessons, restaurants, and souvenir shops.

Bodiam Castle glories in the prestige of being one of England’s most beloved historical monuments. If you ever get a chance, then do put it on your list of places to visit. To make things easier, here’s everything you need to know about planning your trip:

How to get to Bodiam Castle?

Getting to Bodiam Castle from London is quite easy. There are two ways that you can do so. The first one is by train. You can take the hourly-run train from Charing Cross to Robertsbridge. The ride is an hour and twenty minutes long and costs between £23-£45 ($28-$55 USD). From there, it’s a 10-minute taxi ride to Bodiam Castle that might cost you anywhere between £14-£18 ($17-$21 USD).

The second option includes making the entire journey in your own car. The seventy-three-minute drive is quite scenic and will cost you around £10-£15 ($12-$18 USD) in gas–less than what you’ll have to pay via public transport.

Bodiam Castle is open all-week round. Opening time is at 10:00 am and closing occurs at 5:00 pm. The car park opens 15 minutes earlier (9:45 am) so that visitors can be granted easy access. During the tour, you can visit the castle grounds, the Wharf Tea Room, the souvenir shop, and the Castle View Cafe.

There’s also the choice of Gift Aid admissions, where ticket prices are £1 higher, which is considered a voluntary donation.

A quick tour takes around 30 minutes, but you can extend it to an hour if you’re really loving the grounds.

For up to date ticket prices and visiting hours visit the official website: https://www.nationaltrust.org.uk/bodiam-castle#Opening%20times

Do you want to see more unique and interesting castles to visit? Read our list of the best castles in England.