The Best 9 Castles to Visit in Lithuania (Listed by Popularity) 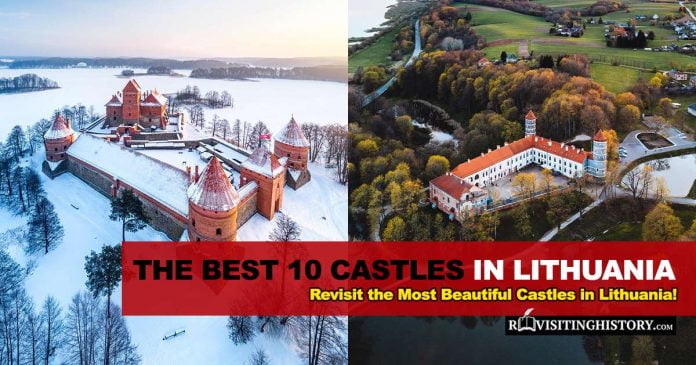 From the humid sealine under the sun to the snowy Hills of Crosses in the north, each part of Lithuania has a story to tell. Lithuania was originally one of the largest countries in Europe: the Grand Duchy of Lithuania once occupied parts of present-day Ukraine, Poland, Belarus, and Russia. The main thing which ties this country with its rich heritage is its castles.

Lithuania has seen a recent hike in tourism owing to its rich history, architecture, and pristine seaside. The low costs involved and the relatively smaller crowds make it seem like a hidden jewel among other conventional tourist destinations in Europe. Since its capital Vilnius is one of the cheapest cities across Europe, planning your next trip to Lithuania will definitely not burn a hole in your pocket.

Read on to find out more about a few of the stunning castles you can visit in Lithuania.

9 Most Popular Castles to Visit in Lithuania

This castle was strategically built on a small island during the late 14th century. In addition to being a royal dwelling for the Grand Dukes of Lithuania, the towering stone castle adorned with red bricks functioned as a cultural center of interest for a lengthy period of time. Since it was the only fortress constructed on the water in Eastern Europe in its time, it was regarded as a marvel of medieval construction.

Today, the castle flaunts a museum with more than 40,000 items on exhibit. From information about the history of Trakai and the surrounding regions to the applied art collections of pipes, clocks, medal collections, and more, you are sure to find something to catch your eye. Trakai Castle also holds a special event every year that dives deep into medieval times and aims to educate people about arts and crafts.

This is an amalgamation of three castles that were built to act as defensive structures of the state. Following a series of raids in the 14th century, the Teutonic Knights destroyed a portion of the structure. As a result, it lost its strategic significance after being conquered in the Battle of Vilnius in 1655.

In the present day, this castle stands as a faithful defender of the capital. The National Museum of Lithuania, which houses the Museum of Applied Arts, is located in one of the castle complex’s remaining structures. On the first floor, you can find various photographs taken in the early 19th century; while on the second flags and weapons from the 13th-18th centuries are on display. The castle is also a great spot to get a glimpse of the city from above.

Birzai Fortress was erected by Duke Kristupas Radvila between 1586 and 1589. One hypothesis is that the name originated from biržis, meaning “birch grove”. It is the best-preserved bastioned castle in Lithuania. This was a massive defensive site, it still retains over one hundred cannons within its fortifications.

A major Lithuanian fortress in the 17th and 18th centuries, Birzai was overrun and partially destroyed by the Swedes in 1625–1627. Renovation efforts were started before the Northern War broke out in 1655, Birzai again took significant damage. It was later successfully re-constructed in the Renaissance-Baroque style with bastions starting in 1669. After hosting the signing of a Polish-Russian pact against Sweden in 1701, the castle was fully destroyed by the Swedes in 1704. The castle was eventually rebuilt in 1985 to host the Biržai Regional Museum, which remains at the estate today.

This castle was built in the 14th century and is one of the oldest brick castles in Lithuania. The exact date of the original Kaunas Castle’s construction remains a mystery. Some archaeological evidence suggests that this fortress was erected in the 14th century. The castle is located on an elevated bank at the intersection of two rivers. When the castle’s gun galleries are taken into account, the walls come out to be more than 11 meters (36 ft) high.

Large parts of the castle were flooded in the mid-17th century, after which Kaunas Castle remained abandoned for a long time.  In 2010, a large-scale reconstruction effort took place. It is presently used as a museum branch and art gallery, along with hosting various cultural exhibitions–all of which are open to tourists and locals alike.

Historians claim that this castle originated in the first half of the 14th century when the Lithuanian Grand Duke was in charge. Its structure consists of four main towers, which are joined by walls that are roughly 2 meters (6.5 ft) wide and 15 meters (49 ft) tall. The residential tower, on the other hand, is about 30 meters (98 ft) tall. This castle is situated on the way to one of the largest trade routes in Lithuania, once used as a path to travel between Russia and Lithuania.

This castle holds various events like the Annual Medininkai Castle Games, ceremonial days, musicals, etc. Due to its intricate and thoughtful architectural aspect, it also attracts a lot of photographers, painters, and graphics-oriented individuals. You will also find various educational activities designed especially for younger visitors in the castle yard and the conference hall.

The Best 20 Castles to Visit in Italy (Listed by Popularity)

The Best 19 Castles to Visit in Wales (Listed by Popularity)

Panemune has been a notable site since the Crusades when a defending castle was built to protect Lithuania from the German Order. The castle at the time was known as Panemune, but it cycled through Gelgaudia Castle, Zamkus Castle, and Vytenai Castle before finally returning to its original name after the early 20th century. The aspirations and grandeur of the aristocratic Eperjesi family from Hungary, which diminished with time, are reflected in the forms preserved within the stone walls of this castle.

The castle standing today was a reconstruction commissioned by Antanas Gelgaudas, the Grand Duchy of Lithuania’s flag bearer when he purchased the estate. It is considered to be one of the most authentic castles in Lithuania. The castle often hosts art exhibits as well as many theatre events on its grounds.

The construction of this castle began in the late 16th century. It was first owned by King Sigismund II Augustus of Poland, but was later demolished after suffering wartime damage. Following this, a new castle was built on the same location by a German knight named Krispin Kirschenstein.  It was further renovated by the Olendzki family in the 19th century.

Currently, this castle has been turned into a secondary school but is open to tourists during the summer touring season. The walls of this tower go as high as 35 meters (115 ft), visit behind the protective walls to find a serene landscape of plush surroundings … at least when school is out!  Behind this castle, you will also be able to catch a sight of the longest river in Lithuania, the Neman.

An early 16th-century castle erected on the southern side of Lake Siesikai, Siesikai is one of just a handful of Renaissance-style walled houses in Lithuania. Fortress walls were pierced by bullet holes, while the castle itself was surrounded by three moats and ramparts. The windows and doors of Siesikai Castle are placed in such a manner that the sun produces a unique spectacle during the solstice and equinoxes.

Dominykas Daugla, the manor’s owner at the time, restored the castle in the Classicist style in the middle of the nineteenth century. As long as the Dauglo family was alive, they stayed in the castle. The state took over the manor in 1940. The castle was abandoned in 1980 and left to the elements. The first level of the mansion has been completely repaired; the second story is now being restored.

Raudonvaris Castle is first mentioned in Teutonic Order records of 1392 as a pagan stronghold before a Teutonic castle was raised on the site. The castle passed into the ownership of the Polish royalty and the Grand Dukes of Lithuania. In 1549, Sigismund II Augustus gave Raudonvaris to his wife, Barbara Radziwill.

The castle fell into disuse after her death until her brother’s great-great-grandson, Prince Janusz Radziwill, ordered a restoration into the form we see today. Raudonvaris had to be rebuilt again–with some Neo-Gothic flair–when the Russians destroyed it following the November Uprising.

In medieval times, Lithuania was known for its wooden castles. However, they dilapidated over time, leaving behind these stone and brick castles. Nonetheless, all the castles listed above have a rich history and millions of stories woven beneath their tall walls.

Give yourself some time to tour around these castles and learn about the heritage of this place. We hope this guide helped!