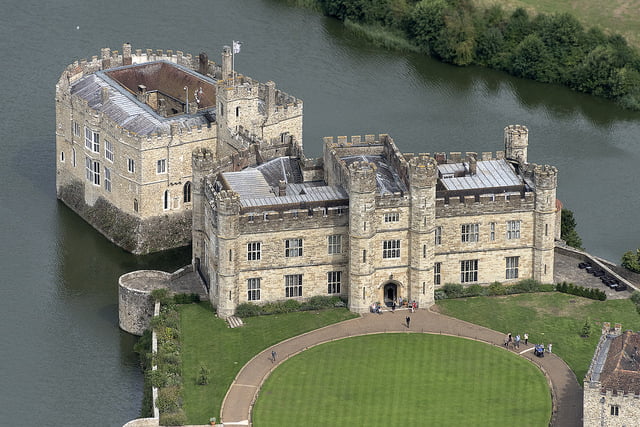 Like every other ancient in the world, the Leeds Castle situated at Kent, England, is one whose historical chronicles are worth reading about. Of course, the beauty of Castle is one that surpasses what mere words can describe.

No wonder, it has been designated as the “loveliest castle in the world.” Surrounded by the calm waters of River Len, the magnificent monument sits embedded in an island east of the village, Leeds. Without mincing words, it is indeed a sight to behold. As gathered from the annals of history, the antecedent of the castle is such that predates the ancient Norman Conquest of England and the reign of the Saxon clan.

No wonder, it has been designated as the “loveliest castle in the world.” Surrounded by the calm waters of River Len, the magnificent monument sits embedded in an island east of the village, Leeds.

Interestingly, the castle has also served as home to several queens of the medieval era in its lifetime. Eleanor of Castile; Phillipa, wife of Edward III; Catherine of Aragon, Joan of Navarre to mention a few have lived at one time or the other in the beautiful castle. This underscores why the castle is being often addressed as the “Castle of Queens.” It even served as a prison at some point in time and a hospital at another. However today, it is a remarkable tourist attraction.

Where is Leeds Castle Located?

Leeds castle is located on an Island at Maidstone – Kent, United kingdom.

When was Leeds Castle Built? Who Build It?

The castle was built in 1119 by Robert De Crevecoeur. However, King Edward I invested heavily to improve on the structure. Also, Henry VIII’s contribution to the transformationcannot be overemphasized.

The castle operates seasonally. It can be visited during spring to summer (April and September) and winter to autumn (October and March).

You can also visit Thurnham castle, Sutton valence castle, Upnor castle and the Chatham castle. The Stone Shop and the Queen Victoria monument is a must see too.

The Leeds castle which stands as a grand antique today, tourists’ delight and a masterpiece location for filming used to be a wooden structure owned by a Saxon chief named “Led.”However, in 1119, the site was reconstructed and rebuilt in stone by Robert de Crevecoeur as a military post intended to serve as a stronghold against Norman intrusion into England. Subsequently, it was passed down as an inheritance among the family of De Crevecoeur until 1278 when it was bought by Eleanor of Castile, King Edward I’s queen, and it became the favorite residence of the duo.

The castle was besieged and seized in 1321 by the forces of Edward II from Margaret De had denied Edward’s Queen, Isabella of France ingress into the castle. She’d instructed her archers to fire upon the queen killing six of her cohorts. After the death of Edward, it became the home of Isabella.

It had been passed down from one person to another. Those who have owned the castle include Richard II, Henry VIII in 1519, Robert Fair fax to mention a few. Lady Baillie, the last owner of the castle had handed the castle to the Leeds Castle Foundation in 1974 following her demise.

The beautiful castle presently serves as a tourist site. The Castle Maze, the Dog Collar Museum, the Culpeper Garden, the Woodland Garden, the Segway Tours, the Falconry View, the Go Ape tree top adventure to mention a few makes the castle irresistible to tourist. It boasted of over five hundred thousand tourist in 2015.

Also, mind blowing movies such as Kind Hearts and Coronets, Waltz of the Toreadors and the series, Doctor Who have been shot in the castle.

Interestingly in recent times, it serves international peace purpose as it has been used as a ren de vouz for political accords and treaty signing. The Northern Ireland Peace Talk led by Tony Blair in 2004 is an apt instance.

HISTORY QUIZ TO YOUR INBOX!